WASHINGTON – Arizona was identified Thursday as one of seven states where Democrats plan to “fight like hell” to turn the state government from red to blue in 2020.

Democrats still are in the minority in the Arizona Senate and House of Representatives. But after gains in the 2018 elections, political experts in the state say a Democratic takeover is not out of the question, and one national Democratic organizer said she is “in it to win it in Arizona.”

“These dark red states are the targets that we believe we can flip this year,” said Jessica Post, president of the Democratic Legislative Campaign Committee, which kicked off its Flip Everything campaign Thursday.

Along with Arizona, the campaign is targeting statehouses in Texas, Iowa, Minnesota, Michigan, Pennsylvania and North Carolina. It has already put $1 million to support local Democrats running for state legislatures, by offering resources, training and support in those states, including $100,000 in early funding for the Arizona DLCC.

Post said the Democratic Legislative Campaign Committee is planning to raise and spend $50 million nationwide in this election cycle.

Mike Noble, chief of research of OH Predictive Insights, said the campaign committee’s goal of flipping the Arizona Legislature is not “unrealistic at all.”

“I would say Democrats that have typically been pretty downtrodden in the historically ruby-red state of Arizona, they’re emboldened this cycle,” Noble said. “It is very close now that the share of power could easily flip in the legislature.”

Republicans enjoy a 31-29 advantage in the Arizona House and a 17-13 advantage in the Senate, after losing a handful of seats to Democrats in 2018. Post hopes to continue those gains in 2020 and win Democratic majorities in each chamber.

“There’s a pretty decent possibility that Democrats could take over the chamber if Republicans aren’t watchful,” Noble said.

But Arizona House Majority Leader Warren Petersen, R-Gilbert, said Republicans are aware that Arizona is a targeted state, and that they are ready to work hard in 2020 to keep their majority.

He acknowledged that Arizona’s population growth is being driven by people from traditionally blue states, such as California and Illinois. Even though they “enjoy a registration advantage,” the state’s Republicans are not taking anything for granted, he said. 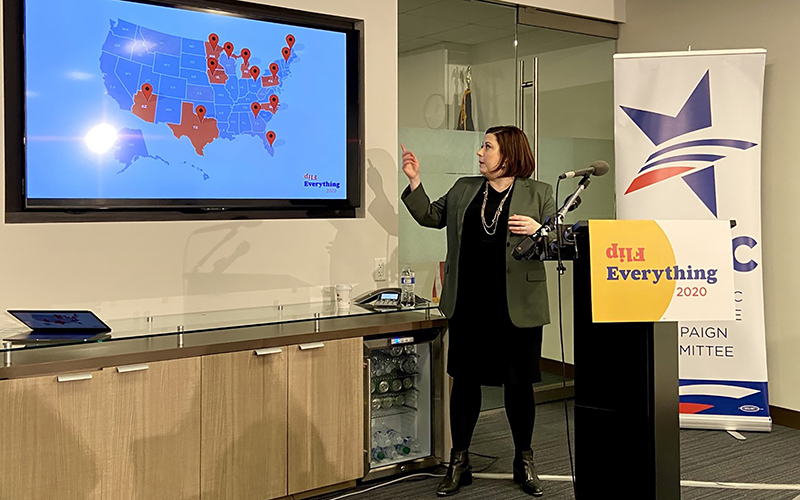 Jessica Post, president of the Democratic Legislative Campaign Committee, said Arizona is one of seven “deep red” states where her group aims to flip the statehouse to Democratic control in 2020. (Photo by Jessica Myers/Cronkite News)

“We know that Trump’s going to be on the ticket and he’s going to bring out a lot of strong voters and strong support for him,” Petersen said.

“We feel good about 2020. I think we feel like if we work hard and if we run good campaigns, we feel like we can keep the state red.”

Post said 2020 presents a once-in-a-generation opportunity to flip the state legislatures that will draw congressional and legislative redistricting maps for their states in 2022.

“We have this generational opportunity to change the composition of state legislatures, while also building out great infrastructure across the country in order to help the presidential nominee from the bottom up instead of the top down,” Post said.

“We’re building early infrastructure in these states by building up strong state legislative campaigns, these campaigns will ultimately benefit the nominee.”

Since late 2016, the Democratic Legislative Campaign Committee has helped flip about 400 legislative seats to blue, reclaiming the majority in eight chambers in the process, according to its website. Post said her organization is watching a handful of states beginning to lean more left than before, such as Kansas and Wisconsin.

But she believes that day has come for Arizona.

“We’re only two seats away in the state House, three seats away in the Senate, this is increasingly a presidential battleground,” Post said, as well as having one of “the hottest U.S. Senate races in the country.”

Political consultant Jason Rose said Democrats are justified to be optimistic about their potential to turn Arizona blue, but he feels it will continue to lean a center-right state.

“While the red may not be quite as bright, it still leans that way,” Rose said. “And I can assure you, if the Democrats have success in 2020 and we have a President (Bernie) Sanders or President (Elizabeth) Warren, you’re going to see the Republicans rage back in a big way.”

He said there is a natural pushback when one party has held the majority for so long, as Republicans have in Arizona, controlling the legislature and the governor’s office for much of the last three decades.

And if Arizona starts to lean blue, he said, “the natural rhythm of change will blow back in the Republican’s direction.”